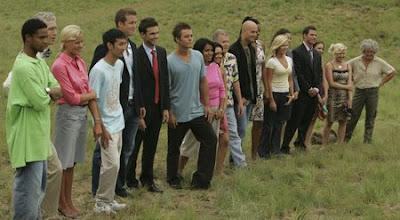 THERE SHE IS! That's Gillian (extreme right)
All’s not well in Eden.

Shot in Gabon, Africa, Survivor’s 17th installment is bogged down by daft contestants who just won’t let up.

Gillian, a 61-year-old retired nurse from sun-drenched California, takes the cake for simply being her sunny, helpful self. Eager to prove her worth, she scoops elephant droppings from the jungle, then urges her tribemates at Fang to consume the grainy muck for sustenance.

While Fang is heavily populated by inept, indecisive players, Kota’s synergy as a group is admirable. Ace, 27, calls the shots around camp, while Charlie, 29, stays under the radar, letting Ace take all the blame.

Charlie wastes no time in hooking up with Marcus, Kota's resident dreamboat, then recruits Corinne and Jacquie for their “onion” union. With his boy next door veneer and good persuasion skills, Charlie it seems, was born to play “Survivor.” The one thing distracting him is his growing affection for Marcus. “Ever since I saw him on the mat and he picked me, I just felt this connection in his deep blue beautiful eyes,” he reveals.

Here’s hoping he keeps his eyes fixed on the million dollars. With Marcus strutting in his peripheral 24/7, that’s easier said than done. 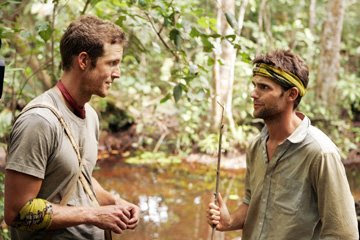 I hope I have the patience to go to work early on a Friday so that I could catch the 725pm replay at QTV or cancel Saturday afternoon/night lakads until after the 525pm replay.

Do you watch Survivor Philippines too?

Haven't seen Survivor: Philippines yet... Is it good?