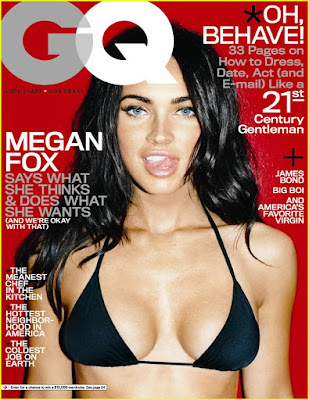 HOLY #@%^! Megan Fox says it as it is
There she is, licking her lips like a playful little minx.

Terry Richardson's snapshot of Megan Fox for GQ is one of the more memorable photographs from last year (not because of its artistic merit—there's very little of that there—but for its prurient, lascivious appeal).

In writer Mark Kirby's accompanying profile ("Megan Fox Was a Teenage Lesbian"), the 23-year-old actress reveals how she fell for a Russian stripper ("She smelled like vanilla"), how protective she is of comic geeks ("They're not nerds, they're just passionate!") and how much she adores Xbox and Gears of War ("That's the upside of dating a woman who's almost a man. She likes the same things that you like, but she has a vagina!").

When asked if her character, Mikaela Banes, is more fleshed out and complex in Transformers: Revenge of the Fallen, she replied, "Transformers 2 is directed by Michael Bay."

I never had the urge to watch Transformers, but now, I feel like giving it a go.
Posted by Visual Velocity at 10:23 PM

Forget GQ. When is she going to pose for Playboy?

nyahaha
i like the fact you called her an actress
=)

Raft3r: There are different kinds of actresses: A listers and B actresses. I'm not quite sure which cluster she belongs to. Maybe she's an offshoot of A and B. Ehehehe.

philos: I find her endearing. The things she say are phenomenal. Google her GQ October 2008 profile online. It's a fun read. =)

is it really true that he oh she is a guy!

the donG: You mean she's a dude? Ehehehehe.

Wait, let me check on her.

She can do better than that cover, but I guess they'd rather go upfront with the sex and forgo the innuendo.

If by "fleshed out" they mean she gets to show more flesh, then I guess that her character was indeed fleshed out. And her pout was given more prominence. haha!

ShatterShards: Haha, true, true. Did she bend over again the same she did in the first Transformers? I haven't seen either of these films yet. I've been avoiding them like hell. Ehehe.

whew. now that i blurted her name out im back to being normal, wait... i love the sound of her surname foxxxxxx.

Hmm... not to offend anyone here. Am I the only who thinks Megan is just ordinary?

Oh yeah, did she bend over! She also pouted, made googly eyes over the camera, jumped, bounced and some other stunts that was sure to distract you from those metallic things that transform. hehe

ShatterShards: Poor girl, Michael Bay really milked his money's worth did he? Ehehe.

visiting you from lawstude :D

AJ: Ehehe, true, true. It's all about Megan.

Thanks for dropping by!

lesbian or not, i dun care.

you're still hotter than hell!

as i said, the word fuckable is invented for chicks like her. woohoo!

jayclops: I dare not contest that for fear of death.

philos: She's a riot. She's relatively new to the industry; still raw — that's why she keeps on saying all these crazy things. She reminds me of Leonardo DiCaprio pre-Titanic. Back then, DiCaprio would say retarded stuff like, “Would you rather have oral sex with an elephant, drink the afterbirth of a hyena or be raped by a pack of wild dogs? I guess I’d drink the afterbirth, but I’d have to fry it up. I’m going to look like a sicko!”

Naku panu yan, I said bad words in public, like in the office I usually end or abbreviate my sentence with words such as **** and ****... Madame.... hehehe

I have just downloaded iStripper, so I can watch the best virtual strippers on my taskbar.