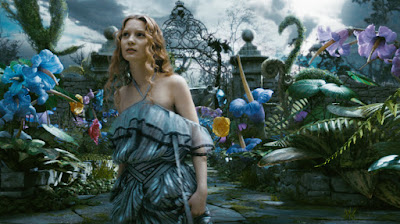 Loosely translated, that's "Down with the Red Queen."

In Tim Burton's Alice in Wonderland, a ragtag group of misfits revolts against The Red Queen (Helena Bonham Carter) who — since overthrowing The White Queen (Anne Hathaway) — has been ruling with an iron fist.

Alice returns to Wonderland 10 years after her first visit, reuniting with familiar faces.

As for the Mad Hatter and The Red Queen — two of the more memorable characters in Alice in Wonderland — Burton turns on the sympathy button, showing us the very things that make them human. The strange hue of the Mad Hatter's hair and eyes is attributed to mercury poisoning while The Red Queen's temper is said to be caused by a tumor growing in her head.

With Burton's penchance for wit and flair and the film's superb cast of supporting actors (Michael Sheen as the White Rabbit; Alan Rickman as Absolem, the Caterpillar; Christopher Lee as the Jabberwocky), Alice in Wonderland may just be this year's most promising movie.
Posted by Visual Velocity at 10:07 PM

I wish someone would also invest on an adaptaion of the Looking Glass Wars, which is a different approach to the story of Alice. Anne Hathaway looks so pretty here, but in usual Tim Burton fashion, she looks demented as well.

ShatterShards: I can't wait to see Anne Hathaway's interpretation of The White Queen. She describes her as "Cute but psycho," drawing inspiration from Blondie, Greta Garbo, and the artwork of Dan Flavin in portraying her role. The White Queen also doesn't walk, but "floats," which makes for a rather interesting sight. :)

Why are Johnny Depp and Helena Bonham Carter in every Tim Burton movie? Not that I'm complaining... they're good.

citybuoy: It does, although Johnny Depp looks like a clown with his inch-thick makeup, heheh

Lawstude: Based on movie stills, it looks like Alice in Wonderland will be a visual knockout.

Raft3r: Most definitely! Burton's crazy-cool, and I mean that in a good way, heheh

Josh: Romantic consorts of Burton occasionally appear in his films. Lisa Marie appeared in a couple of his movies including Ed Wood and Mars Attacks. Bonham Carter, on the other hand, appeared in five.

Bonham Carter and Burton have a close relationship with Depp, who is one of their children's godfather. I think Depp is one of Burton's favorite actors.

I'm such a geek, heheh

Huh. I didn't even know that Tim Burton and Helena Bonham Carter are together. How long before he puts their children in his movies?

Josh: Who knows, maybe they already did a cameo or something....

I wouldn't be surprised, though, if Depp somehow ends up in his next movie, hahah

Same with Nyl. I absolutely can't wait for this to come out.

And I hope, for once, Tim Burton makes a film wherein my Honey Johnny doesn't get covered in make-up. Hay, wishful thinking.

Manech: I have bad news; brace yourself. They covered your Honey Johnny in hideous makeup again, heheh.

Marla Singer, we missed you! :D

Marla is definitely the best! She's like Lorena Bobbit on speed. I love her. :D

im actually looking forward to this one. i liked sweeney todd a lot.

jayclops: I'm looking forward to seeing Alice too. I love Michael Sheen in Frost/Nixon; I wonder how he'd interpret the White Rabbit, haha

I haven't seen Sweeney Todd, though. I have to find a copy first, heheh

And yes, of course. I saw the trailer.

Good thing I wake up every morning to his unmake-up-ed (what a term) face. :)

Belated happy Valentines to you too!

Axel: I don't have one, hahah

ahahaha... beauty is in the eye of the beholder ba??

Victor Gregor: I'm not really sure about the exact date, but it's definitely going to be released in March. :)