Diamonds are a a cat's best friend. In LEGO's Catwoman Catcycle City Chase, Selina speeds away on her micro scooter after stealing a fist-sized diamond. Hot on her heels is a grim, jetpack-wearing Batman.

The toy box set contains a street corner, brown boxes, a newspaper stand and two mini figures: Batman and Catwoman. They're actually cute, most especially Batman with his trusty jetpack. Catwoman's Catcycle takes the cake, though. It looks like a beefed up, steroid-injected Vespa scooter. To stress that women mean business, an unforgiving whip is lodged at the motorcycle's rear end. Take that, Batman! 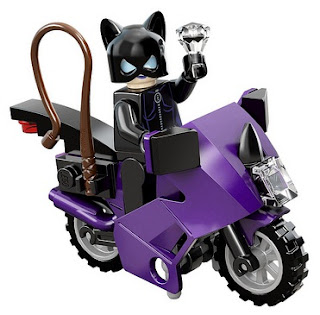 Posted by Visual Velocity at 5:20 AM

haha
this is so cool
i want one