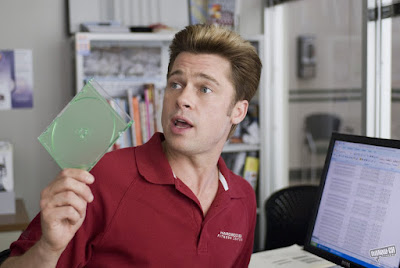 What happens when an alcoholic CIA analyst collides with two blondes from Washington DC? Mayhem ensues, the unthinkable happens, and everything spins in a grizzly, riotous uproar.

In Burn After Reading, Frances McDormand plays Linda Litzke, a ditzy woman obsessed with vanity and cosmetic surgery. When a friend comes across a mysterious CD containing vital CIA information, Linda suggests he “put a note in the ladies’ locker room.”

“Put up a note?” Chad (Brad Pitt) asks incredulously. “ ‘Hello, did anybody lose her secret CIA shit?’ I don’t think so.”

Pitt’s Chad Feldheimer provides the perfect foil to McDormand’s Linda Litzke. Manic and combustible, Pitt brings the house down with his harried, frenzied style of acting.

With Pitt lighting up every scene, Burn After Reading starts off well. However, the film tries too hard to be funny that it eventually chokes, falling flat on the floor gasping for air.

It didn't take long before I realize that the joke's on me. Feeling shortchanged, I initially thought of approaching the ticket booth and asking for a refund.
Posted by Visual Velocity at 10:15 AM

i beg to disagree. i found it really hilarious. the spoiler, however, was brad-fucking-pitt. it's good that he disappeared halfway through the film. except for him, the whole cast was hilarious and convincing. pitt always looks unnatural when acting like an idiot. it's always so obvious that he's "acting".

@Raft3r: Apparently, I'm the only person who finds the film crappy. All the people I know who saw the film like it. Not only do they like it, they love it. :-)

@Anonymous: I'm not a fan of Brad Pitt either.

an officemate loaned me a copy but i have to watch it yet. she didn't like it.

i hear pitt's the curious case of benjamin button is amazing.

I think your officemate and I are of the same wavelength: I don't like the film either. :)

Australia sounds shitty to me; just a hunch, I haven't seen the trailer yet. lolz

saw this over the weekend. some scenes were funny but it didn't quite work out for me.

Hallelujah! Nice to know someone doesn't like the film as well. We're in the minority though.

I think I liked it more because of the performances, esp the underrated John Malkovich. Frances McDormand was good too.

Was the film billed as comedy ba? Well, it has some serious laughs, and when I say serious, it sometimes lead to exasperation. Not really a great film, but forgivable, esp for the Coens who just came from Oscar glory.

I love John Malkovich too and was very impressed with George Clooney, whom I used to hate with a passion.

I was disappointed with Burn because my expectations were too high. I was expecting it would match Fargo or at the very least, their short film, Tuileries. But it didn't, so I was a bit pissed. Hehe.