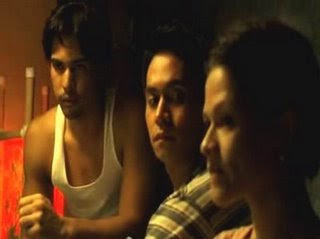 Adolfo Alix's Imoral was made available in DVD four months after it debuted in Cinemalaya. Although the disc's speedy release is greatly appreciated, its noticeable bungle in the features department is a big letdown.

No subtitles, no theatrical trailers, no scene selection.

Surprisingly, an extensive gallery of the cast and a nice video of the film's theme song were included. Sang by actor Arnold Reyes, "Kung Ako Ba S'ya" makes this DVD, somehow, worth it.

Posted by Visual Velocity at 8:51 AM

saw this in cinemalaya this year. how did you find the movie?

I like the opening scene, the screenplay is alright, the theme song is very nice, and just like most Alix flicks, the cinematography is superb. But there's something about the film's ending... I find it flat and anticlimactic.

And the bad thing about it is, Jonathan and Abby were left leaving together in one roof. Di ba they hated each other's guts?

Dante was really lucky: he was able to leave both Abby and Jonathan and start from scratch — may pocket money pa siya. Hehe.

i still have to find a pinoy dvd na maganda at siksik sa special features
hay...

btw, you are now in my blogroll

Thanks, by the way, for adding me to your blogroll. I added you in mine. :-)

The movie is about people who thiink they know someone they love very well. The wife wonders if she is loved by the husband. The husband's male lover, despite the fact he supports them because he makes more money, surprisingly is the most admirable character. The husband, who is confused on who he loves more, the wife or the male lover, in the end, reveals that he loves himself most.

Now watch the movie again. It is a very well-written character-driven movie.

I originally saw the film at UP. I have the DVD and I'm planning to watch it again — maybe this coming weekend.

Have you read A Separate Peace? Got mine from National Bookstore. Awesome book!