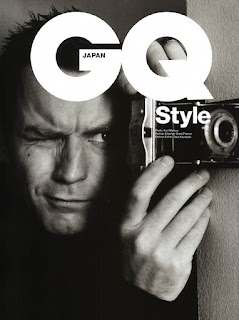 GQ Japan's December 2008 issue grooms actor Ewan McGregor as “The Detective,” a camera-wielding sleuth with a strong predisposition for tailored suits, fedoras, and spying. Squinting with both hands on his camera, McGregor hits the mark by channeling the rabid intensity of a zealous paparazzo.

In his upcoming film, The Men Who Stare at Goats (a Grant Heslov-directed comedy based on Jon Ronson's book of the same title), the 37-year-old actor is Bob Wilton, a foolhardy reporter who accidentally finds himself pursuing the scoop of his life: a clandestine US military unit who can make themselves invisible at will, pass through walls, and slay goats just by looking at them. Say what?

More jaw-dropping is the fact that Ronson's book is categorized as non-fiction. 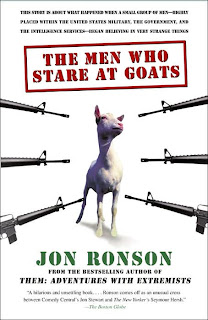 Jon Ronson's book, The Men Who Stare at Goats
Posted by Visual Velocity at 1:49 AM

my fave movie is trainspotting
=)

Yeah, Trainspotting rocks! It's one of those movie adaptations in which the film ended up being better than the book.

Rocknrolla is awesome! I like it better than Lock, Stock and Two Smoking Barrels. Galing ng cast! Gerard Butler, Thandie Newton, Ludacris, Jeremy Piven were perfect. Oh, and if you like Toby Kebbell in Control, he's there too!

Butler and Newton have a dance sequence; that in itself is worth the movie ticket. Check it out. :-)

i saw rocknrolla na. you were right. the dance sequence was worth watching. hehe. i think lock stock is better than this one. have to watch it again though.

Gerard Butler and Thandie Newton's dance moves are craaazy! I already have the DVD; I think that's the scene I'll be playing over and over and over again...

I've been trying to boogie like Gerard Butler, but I can't seem to get it right. Hirap! Ehehe.