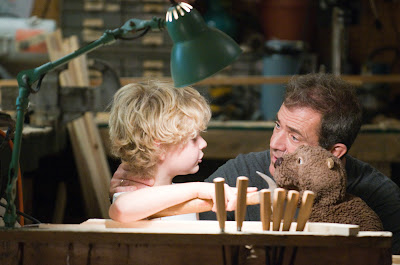 Release Date TBA (Philippines) Director Jodie Foster Cast Mel Gibson, Jodie Foster, Anton Yelchin, Riley Thomas Stewart
Walter's chronic depression is taking its toll on his domestic life. It prompted his wife to throw him out of their house, and his son to call him life's biggest "nut job." Desperate, he uses a toy beaver to reconnect with his family, his peers, and most importantly, with himself.
Time has done nothing but strengthen Jodie Foster's bond with Mel Gibson. It's been 17 long years since Maverick (1994) — their first onscreen partnership — and Foster is standing by Gibson despite the latter's predisposition for controversy.
With Gibson, talent goes hand in hand with bravado and offhand eccentricities. These didn't prevent Foster — who acted in, as well as directed The Beaver — from getting an earnest performance from the 55-year-old actor. Although predictable and hopelessly sappy, Gibson's Walter Black makes an otherwise cliché domestic drama, worth your buck.
____________
* This piece was written with Raft3r in mind, the world's most persistent Jodie Foster fan.
Posted by Visual Velocity at 2:46 AM

Jodie Foster rocks! So does this blog! Yehey!

I am really looking forward to this one.

pointlessparanoia: Yeah, I hope they screen the film here in Manila. :-)

The Internet is our friendly pseudo-cinema, though.