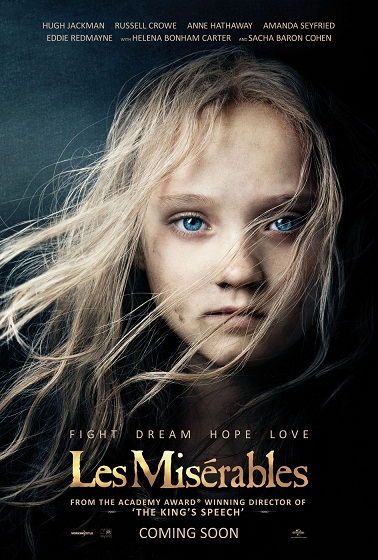 As the release date of Tom Hooper's onscreen adaptation of Cameron Mackintosh's mega musical draws near, here are 10 things you need to know before belting along Anne Hathaway's gut-wrenching showstopper, "I Dreamed a Dream."

1. All the songs in the film were sung live during filming. The cast wore earpieces which played live piano accompaniment. Orchestral music was added later during post production.

2. A new song not originally in the musical was added in the movie. Composed by Claude-Michel Schönberg, "Suddenly" tells how Jean Valjean (Hugh Jackman) took care of Cosette after rescuing her from the Thénardiers.

3. This is director Tom Hooper and Helena Bonham Carter's second film. They first worked together in The King's Speech (2010)

4. Anne Hathaway had her hair cut short for her role as Fantine. The latter originally has blonde locks. In the film adaptation, Hathaway is nowhere near blonde.

5. Samantha Barks plays the love-struck Éponine, the very same role she had in the 25th Anniversary Concert of Les Misérables (2010).

7. Colm Wilkinson, who originated the role of Jean Valjean in the West End and Broadway, has a minor role as the Bishop of Digne. Tony-winning actress Frances Ruffelle (the original Éponine in Broadway and West End) will have a cameo as a prostitute.

10. Don't expect the cast's singing to be as good as the original Broadway and West End recordings. Hugh Jackman is no Colm Wilkinson.
Posted by Visual Velocity at 11:56 AM

My gawsh, I get goosebumps whenever I see the trailer for this film!

And I love Eddie Redmayne. I thought he was sooooo adorable in My Week With Marilyn.

And one little thing: breakthrough? or breakout? tee hee

teka
what is borat doing in this movie?
hehe

citybuoy: Have you heard him sing? Ganda ng boses! He sings like an angel.

I saw this video on youtube where someone compiled the actor's singing moments. Nakaka-goosebumps boses niya!

citybuoy: Among the principal cast in the movie, he's the only one who can actually "sing." Walang sinabi sina Russel Crowe at Hugh Jackman! :D