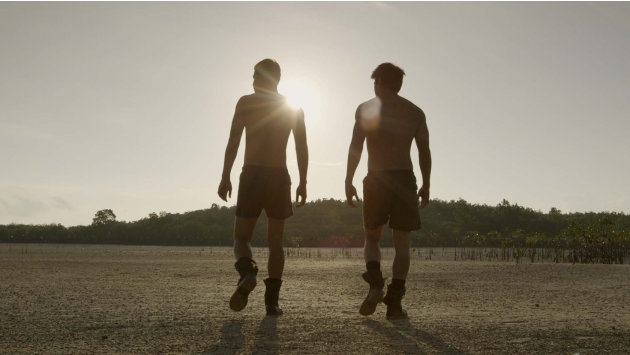 The first half of the movie is rife with beautiful long takes of Ananda Everingham. The 30-year-old actor's boyish face works magic for cinematographer Albert Banzon. Everingham is the movie's heart and soul and he shines in scenes where his character is lost in thought, drowning in remorse and doubt.

The second half of the movie is punctuated by Zanjoe Marudo's angry soldier rants/revelations. He's like the walking Cliff's Notes of the movie. You can only take so much of his yakking before you start wishing for a tsunami to frisk him off to the Indian Ocean.

As for the mermaid element, if you're thinking Ariel from Disney's The Little Mermaid (1989), think again—Alix's lust-driven she-fish could scar you for life.

Kalayaan is a minor film in Alix's repertoire. Don't expect too much, enjoy Everingham's wonderful acting and take the movie's pretense with a grain of salt.
Posted by Visual Velocity at 10:26 AM

panonoorin ko ito later. what else have you seen?

nanood ako ng posas after requieme. i didn't like it. john lapus was a joy to watch lang.